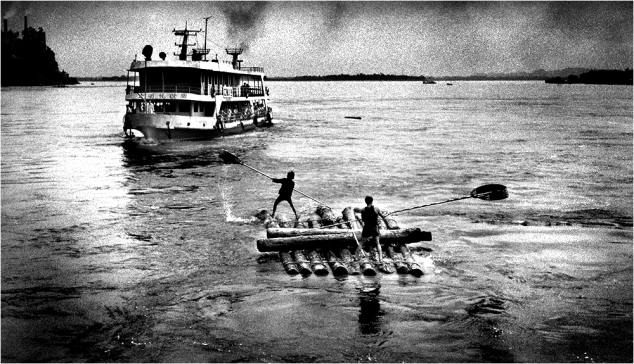 #204-168a China is a fiercely hierarchical country. We see this in human relationships as well as throughout society, including on the roads. Big trucks automatically have the right of way everywhere and at all times. Busses can bully automobiles, cyclists have no rights against autos, and cyclists show little concern for pedestrians. So also on the waterways, as we see here, with two rafters frantically trying to avoid a ferry. The rafters are floating logs down the Yangtze River to a lumber mill. Building materials were in high demand for housing at this time because for the first thirty years of the PRC all resources were devoted to heavy industry. Mao was obsessed with the idea of building up China’s military strength so that China would never again be put under the guns of the Western Powers. This policy resulted in too little housing built for China’s rapidly increasing population.

#204-031 Mao Zedong famously said, “Women hold up half the sky.” Certainly in China they also hold up a good share of the loads as well. This woman is bringing fuel home for the cooking fire. Around the time this photo was taken a cancer map conducted in Yunnan Province showed a high incidence of lung cancer among only women. Researchers puzzled over this for some time before realizing it was smoke from cooking fires made from a certain botanical material in the area was the cause.

#204-025 Mao created the slogan, “women hold up half the sky”—a slogan meant to impress on a society that historically saw women as less valuable than men that women were every bit as valuable and essential as men. Even so, in general, while women were, indeed, “liberated” to hold paying jobs, they continued to bear most of the child rearing, most of the shopping and cooking. There was much strife over the issue, during the commune period that was just ending when I took this photo, of women doing equal work but earning fewer work points than men. For those who worked within the state system there would be a pension and housing after retirement, but for those outside, such as this woman, there would be a need to work until they can’t work any more and then to depend on their own savings an on their children. Thus, the need to have children was very strong, and more children meant more security.

#175-028 Fetching water from the village well was a daily task as most old villages do not have running water. The wide brimmed hats are more practical than umbrellas because they leave the hands free for work. Modernizing these old villages is nearly impossible because the narrow streets and congested housing prevents the excavation necessary for laying sewer pipes and a water supply system. In many places, instead of tearing apart the old town, a whole new town is built nearby.

#142-012 It was sad to see a man with a badly deformed back work as hard as this person at manual labor. Despite claims of being a socialist state, China did not provide a safety net for such people.

#142-008 A building boom was just getting underway in 1979 under the new government of Deng Xiaoping that followed Mao Zedong’s death in 1976. In the countryside, dynamiting could be heard from the quarries every morning when I was there. In some quarries, prisoners were used to manually break the granite down to smaller pieces or to specifications. Manpower being much cheaper than horsepower, this muscular workman is hauling granite to a construction site. The granite was shipped from the quarries to the city on riverboats. 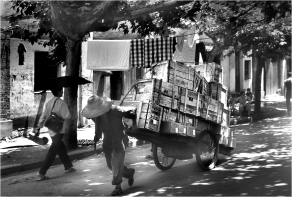 #142-006 The use of handcarts is closely tied with the invention of the wheel. Carts from Central Asia were introduced to China around 1200BC and are still being used today. Visitors to China are often astonished to witness the heavy loads being moved by a single person. For a small businessperson, it is much cheaper to move products by handcarts given the availability of low cost labor.

#122-033 These exquisite Chinese wool carpets are being taken to a merchant. Many will end up in fashionable carpet stores in America and Europe. They are made with natural dyes using centuries old weaving methods.

#115-001 Mao famously said “Women hold up half the sky,” a slogan intended to elevate the status of women and also to justify including them in the labor force. This woman has heard Mao’s call. The downside for women was that while they were expected to work on a par with men, they were still saddled with childbearing responsibilities and housework. Worse, women were criticized if they stayed home and criticized for not staying home if they worked full-time. 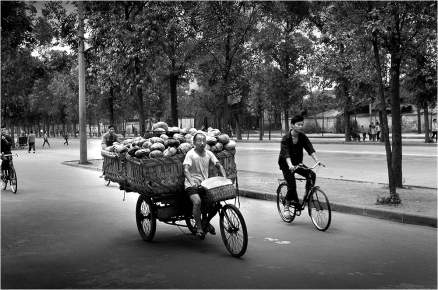 #110-041 By the 1930s, the pedicab replaced the hand-pulled rickshaw. As China modernized, the motor taxis have pretty much swept away them away. However, some still remain, sometimes with a battery-powered electric motor. 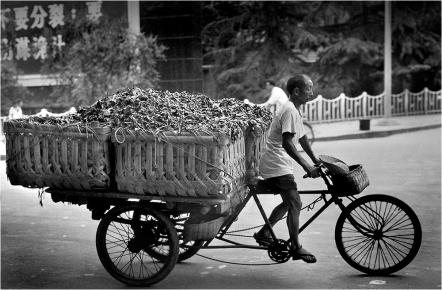 #110-013a With dignity, this tricycle hauler is taking water hyacinth to the country. Pigs grow fat on it. In America this plant is considered a nuisance that clogs waterways. The Raleigh bicycle was imported from England and imitated in Chinese factories. My wife’s grandfather owned a factory that manufactured a Chinese Raleigh. In the communist era, factories produced heavier bicycles than the Raleigh and were just one speed. Those are the sturdy bicycles that are seen with big hogs tied over the back wheel being hauled to market. The three-wheeled chain-driven cycle may have been invented in Southeast Asia. The Japanese used bicycle wheels to make rickshaws, which then were introduced to China. The efficiency of the Pedi cab drove out the rickshaw. The vehicle here is called a banche, and in 1979 it was being used as an ambulance, cargo carrier and as a passenger vehicle in the countryside. 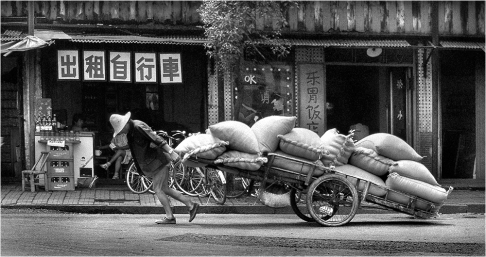 #110-007 Muscle economy. China’s large population and available cheap muscle labor influences the continuation of handcarts that has been in use for over 4000 years. Many things that pay off in the West don’t pay in China. For example, the large size of our farms in the West makes a tractor investment economic, but the small size of a Chinese farm rules out investments in expensive modern mechanization. In China, a cheap labor force and an ox on a small farm are affordable and economic. Thus, in modern China, we still see a lot of labor like this.

#026-145 A foreign motorist in North China, near the Russian border, patiently waits while her flat tire is repaired without the benefit of modern hydraulic equipment. Bad roads meant repair stations were necessary and available all along rural highways.

#026-100a Since the dawn of Chinese civilization, muscle power ruled. This man is pulling a heavy load of thick crockery urns to market. I was struck by the contrast with the comfortable, leisurely couple in the Pedi cab. 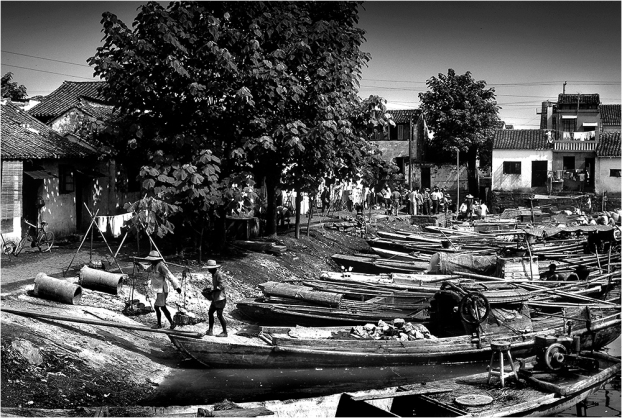 #026-099 There was a surge of new construction starting in 1979 before World Bank loans and foreign investments began to take hold. Construction materials and techniques were still primitive compared to what was coming in the following decades. Here, along a canal in Suzhou, boats full of rocks for building and road construction are unloaded by hand. 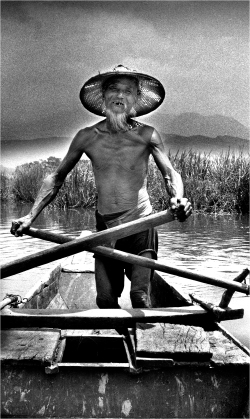 #4051-D-881 The absence of bridge infrastructure in this 1957 Taiwan countryside meant there was a steady market for this ferry boatman who was a marvel of dexterity in the manipulation of his oars. In Shaoxing China, the ferry boatmen oared their boats with their feet.
Tagged china images, china muscle power, china photos, muscle power, vintage china photos